Everything you need to Know About Sleep Apnea 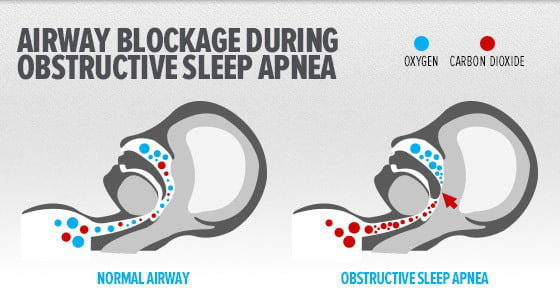 Sleep apnea also referred to as sleep apnoea, is a common sleep disorder. It’s characterized by brief interruptions of breathing during sleep.

These episodes, called apneas, last 10 seconds or more and occur repeatedly throughout the night. People with sleep apnea partially awaken as they struggle to breathe, but in the morning they may not be aware of the disturbances in their sleep.

The most common type of sleep apnea is Obstructive Sleep Apnea, caused by relaxation of soft tissue in the back of the throat that blocks the passage of air. Central Sleep Apnea is caused by irregularities in the brain’s normal signals to breathe.

Some people with sleep apnea have a combination of both types.

In the case of central sleep apnea, it happens when the brain fails to send signals to the respiratory muscles. This is most common in babies, and in adults with heart problems, but can also be caused by some medicines.
In obstructive sleep apnea, the message from the brain to the respiratory muscles gets through but breathing fails through an obstruction preventing the flow of air.
Mixed sleep apnea is caused by a combination of these failures.

Obstructive sleep apnea affects more men than women, and is more common and has increased severity in obese people.

What are the symptoms of obstructive sleep apnea?

OSA is more common in men than women and in people who are overweight or obese. Here are some symptoms to look for if you suspect you are suffering from this disorder.

How is to treat obstructive sleep apnea!

There are several non-surgical options varying from behavioral changes to medications and dental appliances.

Behavioral changes may simply involve getting the sufferer to change their sleeping position, as most apneas seem to occur whilst sleeping on the back. A change in diet and lifestyle with a consequent reduction in obesity can also markedly reduce the severity of symptoms. However, these changes are easier to talk about than to implement.
Dental appliances are sometimes used for mild cases of obstructive sleep apnea – these work by holding the jaw and tongue forward and the palate up to prevent airway closure.
One of the best non-surgical treatments is called auto CPAP or continuous positive airway pressure. This is a machine which delivers heated and humidified air under pressure through a mask to the sufferer whilst they sleep. The machine is light and portable, and most people quickly get used to the noise the machine makes, and to wearing a mask.

Surgical options for obstructive sleep apnea include palate implants, reducing the size of the tongue, procedures on the jaws, and surgery of the nasal passages. Surgery should not be undertaken lightly because of the underlying risks of anesthesia and complications from the surgery itself.

If you suffer from obstructive sleep apnea or know anyone who does, then it is important that you seek qualified medical advice as soon as possible. Continuing your life without recourse to treatment leaves you open to the much higher risk of heart attack, stroke, high blood pressure, and even sudden death.Seek specialist help today.