Everything You Need to Know About Sleep Apnea

Do you wake up in the morning after a night sleep and wonder why you still feel tired? Do you feel unfocused, drained, and have difficulty concentrating on daily tasks? Has a bed partner complained about your excessive snoring episodes? If so, read below the ultimate guide! This article covers everything you ever wanted to know about Sleep Apnea treatment and CPAP therapy.

Let’s start with the Basics. Sleep Apnea occurs in roughly 1 billion people worldwide and many of those case being un-diagnosed. Sleep Apnea as a symptom is the periodical cessation of breathing that happens during sleep time only. When a person sleeps, the muscles of the tongue and throat could relax and this time apnea occurs.  It seems a simple as a straight explanation, however, there’s so much more to it than that.

During sleep apnea the airflow to the lungs becomes blocked on the throat and breathing from nose and mouth does provide the oxygen that human needs leading the person to wake up (arousal), often gasping and choking for air. Because of this process, happens many times during the night, the person who suffers from sleep apnea can’t get the restful night.

What Are the Types of Sleep Apnea?

What is Obstructive Sleep Apnea (OSA)

Obstructive Sleep Apnea (OSA) is the most common sleep apnea, it’s a condition that arises when excess tissues of the tongue, mouth, and throat expand during sleep and partially or completely block the airway, reducing the person blood oxygen saturation due of a blocked airway. The Breathing could stop for 10 seconds and more during each episode and the person could wake up gasping or choking air. And this process repeats many times during the night. This repeated arousal during the night will exhaust the person even with a long time of sleeping. Another that we have to point and it is crucial for the human is the repeated heart running to cover the blood oxygen saturation during sleep apnea face. Some people naturally have a more narrow throat than other people, and when you add in other risk factors, the conditions are right for developing OSA.

Symptoms of OSA include:

The most effective and common treatment for sleep apnea symptoms is CPAP machines. These type of Machines through the tube and mask, pressurize the outside air and gently open the airway so the person will be able to breathe normally. In many cases, these machines can achieve effectiveness therapy reducing the apnea even to the normal state. It’s important to note that CPAP therapy isn’t a cure for OSA.

In low sleep apnea events, there are some alternative treatments that can solve OSA avoiding using daily the sleep apnea machine. Like Provent sleep apnea therapy

What is Central Sleep Apnea (CSA)

The CSA is a different kind of apnea and instead of a blocked airway, we speak about the missing signals from brain leading the person to fail to draw breath, because the brain doesn’t send the instructions to breathe. The Central Apnea typically developing from several conditions such as heart failure and stroke. Some of the conditions could lead to central apneas, Cheyne-Stoke Breathing usually found in those with heart failure or stroke, this main breathing type can be categorized by a gradual decrease in breathing effort over the course of the night. Breaths become shallower, quieter, and softer and eventually breathing stops altogether. Cheyne-Stokes Breathing is the leading cause of CSA.

Symptoms of CSA include:

The Treatments for CSA vary. We use the same PAP therapy as a common form of treatment for CSA. While some users may use CPAP therapy, BiPAP therapy and nowadays even ASV machines. The most important situation that happens in a person who suffers from central sleep apnea is lack of breath per minute, which means that the backup rate is necessary and BiPAP or Servo-Ventilators should be used. The cardiovascular death risk observed in SERVE-HF has been confirmed as true.

BiPAP machines use 2 phases, one for inhalation and one for exhalation phase, which means the machine will follow the person through his/her breathing cycles. If the person is using BiPAP ST, the machine will support him/her even with the back-up rate when the person, due to the central sleep apnea, will stop the cycle of breathing.

What is Complex (Mixed) Sleep Apnea

Complex or Mixed Sleep Apnea is a disorder that combines OSA and CSA, which exist in every single event. The person has stopped breathing by Central sleep apnea and it continues with obstructive sleep apnea and this period, which should be more than 10 seconds, is called mixed sleep apnea.

Symptoms of Mixed Sleep Apneas include:

Mixed Sleep apnea can be varied and many machines can be used for treatment since CPAP therapy could also be effective. But in many cases, the BiPAP machine or even better the ASV Machine, are the best choice for such apneas because it will be able to adjust the needed pressure to the person needs during each breath. 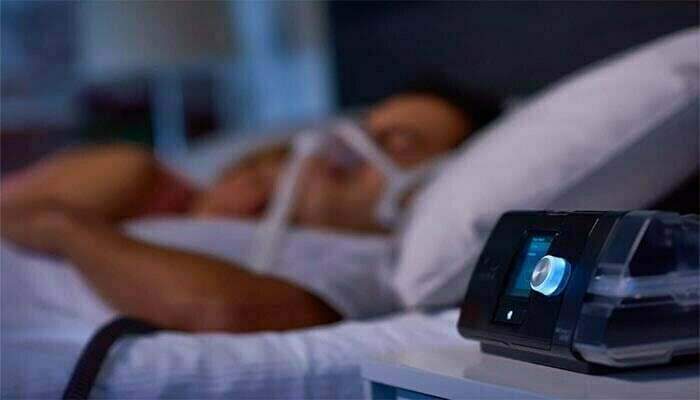